My most harrowing camp story does not involve bears or bugs or bad weather. Instead, it was a surreal journey in search of dessert that brought me to a small town general store where black is white, up is down, and pies are not for sale.

This was July 2014 and there were 10 of us camping out at Ricker Pond State Park in Groton, Vt. The weather was perfect all week and we had hiked and swam and paddled ourselves sore and happy. The culmination of the trip was a birthday celebration for my good friend Colin Tedford.

All parties need sweets, but we had nothing aside from marshmallows and other typical camp snacks. I volunteered to drive into town and find something appropriate to bring back for a birthday party at a campground.

That’s Colin in the lower right-hand corner. He likes to draw comics and you can read his work here: http://www.colintedford.com.

I found a general store about 10 miles away. Inside was a single, untouched blueberry pie wrapped in plastic. It was baked that morning and smelled of dough, sugar, and berries.

“How much for that pie?” I asked, taking out my wallet.

The teenager behind the deli counter didn’t know. She called over the manager.

“We can’t sell you the pie,” said the manager.

I thought I misheard him.

“You can’t sell me the pie?” I repeated back to him.

“No. We only sell pies by the slice.”

Was I going crazy? Instantly, I began questioning the entire basis of capitalism and the free market. Isn’t this how it works? They have a product and I buy that product with money. Have I been doing it wrong all these years? What has happening here?

“You can’t sell me all the pie slices?”

“No,” the manager said, calmly, as if this is something he explains to dumb customers everyday. “If I sold you this pie, I would need to make another one.”

“You … would need to make another pie,” I repeated, hoping the words would make sense the second time.

“In case someone else came in and wanted a slice of pie,” he explained.

“You couldn’t tell them you were sold out of pie?” I suggested, knowing it was a fruitless argument.

“No, we can’t do that,” the manager sighed. “And we’re not making more pies until tomorrow.”

I just want to buy that pie, I explained again. 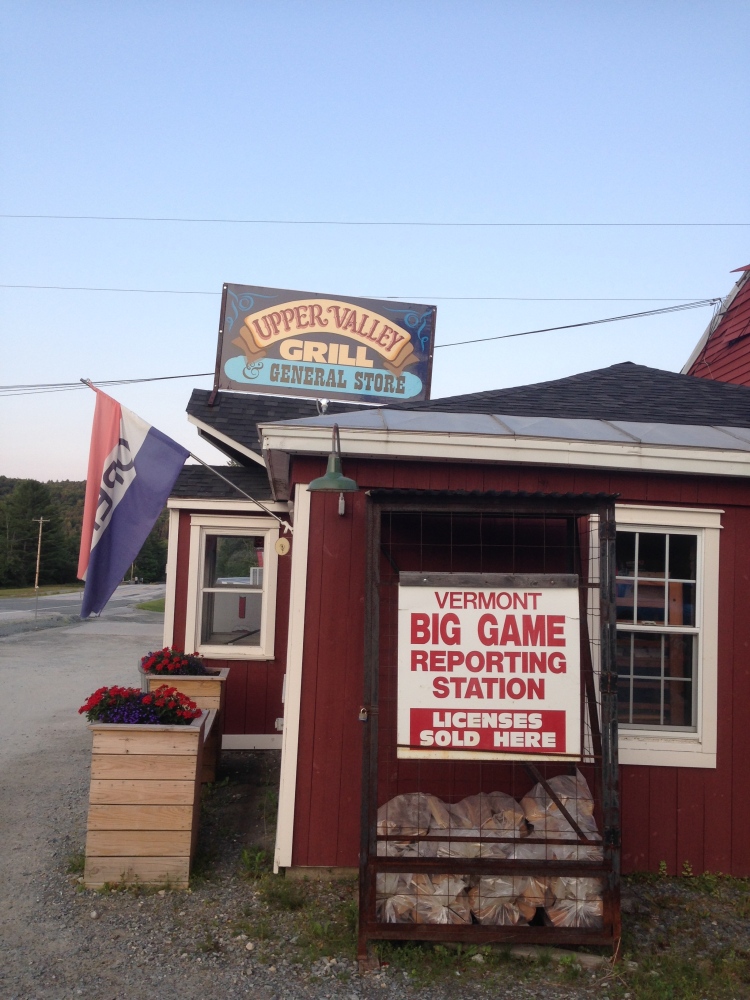 The scene of the failed pie purchase.

Dazed, I wandered outside. I looked back at the general store: An OPEN flag flapped in the light breeze, a large sign explained that hunting licenses were sold there, there were stacks of firewood for sale.

What world was this, I wondered, where there were pies for sale but you cannot buy them?

The corporate chain supermarket 45 minutes away had a whole aisle of cakes and pies and pastries. I picked out a chocolate cake and a package of birthday candles. We presented the cake at sunset after dinner. The birthday candles flickered in the woods like tiny campfires.

I told my pie story as we handed out slices of cake. Everyone laughed. And then we ate cake and forgot that pie was ever even an option.